U shaped kitchen design ideas are the first steps that you should be to look into If you’re thinking about remodeling your kitchen or constructing a bigger one and have some extra space.

A U shaped kitchen is the most functional and aesthetically pleasing kitchen design. Because of its even, three-walled design, this kind of design creates a sense of balance and symmetry, making it an excellent choice for the coveted work triangle in the kitchen. Because it divides three important aspects of your kitchen, the work triangle, or the area between your stove, refrigerator, and sink, is beneficial to your kitchen’s functionality.

A U shaped kitchen layout offers the biggest counter workspace of any layout offering, and it is the most popular. Because of the additional counter space and the three-walled design, you can also install cabinets below and above the countertops to create more storage space.

If you’re thinking of upgrading your kitchen to have U shaped ideas, you might want to think about replacing your existing cabinets with new ones. If this is the case, have a look at our large range of ready-to-assemble kitchen cabinets.

What exactly is a U shaped kitchen layout?

Homeowners that have a bigger kitchen area frequently prefer U shaped kitchens; they require three walls, and many homeowners use the space in the middle to include a kitchen island, which is ideal for food preparation and additional storage. U shaped kitchen layouts are popular among homeowners who want a spacious, efficient, and beautiful kitchen space that can be utilized for cleaning and cooking and also for chatting and socializing. This is due to the larger design and elegant functionality of U shaped kitchen layouts.

What are the benefits of an U shaped kitchen ideas?

When you begin researching standard kitchen layouts, the word “work triangle” is likely to crop up again throughout your research. This guiding principle of kitchen layout design is the triangle spacing that produces a convenient interaction between three main elements of any kitchen: the range, the kitchen sink, and the refrigerator. Triangular spacing is used to create a comfortable connection between the range, kitchen sink, and refrigerator. Almost every kitchen layout will have some variation of the work triangle—and you should be wary of ones that do not include this design element. So when designing a U shaped kitchen, keep in mind that the work triangle must always be maintained.

In U shaped kitchen ideas, where do the appliances go to work?

Most of the time, the cleaning concepts of U shaped kitchen ideas will be positioned on the wall that faces outward, sometimes known as “the bottom of the U.” The range and any additional smaller ovens will usually be situated on one side wall. Most of the time, there will be cabinets and drawers on this side wall as well. Refrigerators, freezers, and other food storage appliances are typically placed against this side wall.

Regardless of the size of your kitchen, you can benefit from the advice provided in the next section on creating U shaped kitchens. We discuss the advantages and disadvantages of various sizes, as well as the possibility of adding design elements like a kitchen peninsula or island.

A small u shaped kitchen

Here’s a small u shaped kitchen to get you started—it’s enclosed by walls and has a window. The distance between the facing lanes in this kitchen plan would be 42-48 inches (107-122cm). The sink is frequently located directly beneath the window. If the window were in a different location, it would be simple to switch the positions of the appliances.

It is possible to make one of the U-shaped kitchens into a peninsula, which is one of the most common modifications to this design. The peninsula can be either single, 1 1/2 width, or double width in width.

The peninsula has been enlarged in order to supply seats, and the upper cabinets have been removed from this area.

Here’s an example of a medium-sized u shaped kitchen. Here, the distance between facing aisles would be up to around 6 ft (183 cm), allowing for more space for two cooks.

Using a U-shaped layout allows you to maximize storage and counter space without losing walking and standing space. In a medium-sized U-shaped kitchen, there is enough room for two cooks to work together comfortably.

A large kitchen with a U shaped kitchen design

Kitchen islands and farmhouse kitchens can be accommodated as the U-shape gets bigger. So that the appliances don’t become too far apart from one another, it becomes vital to keep the appliances in an L shaped kitchen design.

The distance between counters in a large U shaped kitchen design is at least 8 feet. It is possible to create a “G” shape in your kitchen by adding a kitchen island or counter extension to one end of your U-shaped countertop. A dining table can even be placed in the middle of your kitchen layout if there is enough space on each side.

A U Shaped Kitchen With a Peninsula

When designing a U-shaped kitchen, it is customary to incorporate a bar peninsula into one of the legs of the U. A single counter leg that does not attach to a wall on either side of it can be used to do this, resulting in an open counter space for seats. Kitchen peninsulas are ideal for hosting breakfast, appetizers, and drinks for friends and family in the morning or evening. 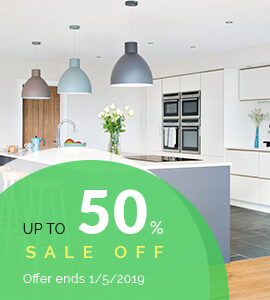